For humans to appreciate clear vision, light rays must be bent or refracted by the clear window at the front of the eye termed the 'Cornea' and the lens so that they can focus on the retina (which forms the inner coat of back of the eye). The retina receives the image formed by these light rays and sends it to the brain through the optic nerve.

means that light rays are not focused to a fine point on the retina resulting in blurred vision. 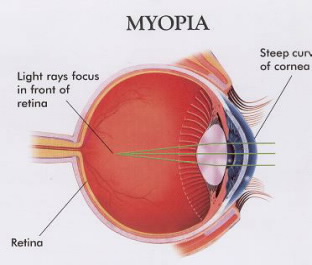 In Myopia (Short sightedness), the eye is longer than normal or the cornea is too steep, so that light rays focus in front of the retina. Near objects are clear but distant objects appear blurred.

What is hyperopia / hypermetropia? 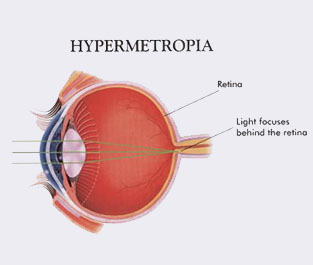 In Hypermetropia (Long sightedness), the eye is shorter than normal or the cornea is too flat, so that light rays focus behind the retina. Light rays from close objects such as pages of a book cannot focus clearly on the retina. 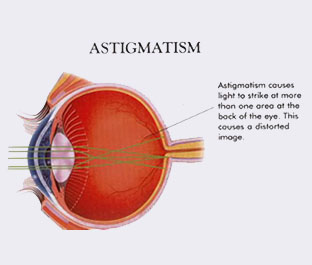 In Astigmatism (Distorted vision), the cornea is more curved in one direction than in the other. This results in vision being blurred for both near and distant objects. 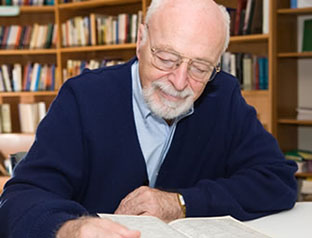 When we are young, the lens in the eye can change its shape allowing us to focus on near objects. After the age of 40, the lens becomes noticeably more rigid and hence reading at close range becomes increasingly difficult. This condition is called presbyopia and is a normal part of ageing.

How does laser refractive surgery work?

The principle of laser refractive surgery is to sculpt the cornea in such a way to allow light rays to focus on the retina without additional correction e.g. with glasses or contact lenses. This is done by use of the Excimer laser and sophisticated algorithms allowing for precise delivery of energy to the cornea to achieve the desired outcome.


Are there different types of laser eye surgery?

In this procedure, a flap of superficial cornea is made by a special device known as a microkeratome. The flap is reflected and laser applied to the underlying residual cornea.
Once the treatment has ended, the flap is folded back and smoothed into its original position. This is the most commonly used method and allows for fast visual rehabilatation.

This is essentially the same procedure with the only difference being that instead of a microkeratome (blade method) being used to create the flap, a very accurate laser is used instead. This laser is known as a femto-second laser and makes laser eye surgery even safer with most patients now opting for this blade free approach.

In this technique, a flap of cornea is not created. Instead, the corneal epithelium (the top layer of the eye) is removed and the laser applied to the underlying corneal surface.
The epithelium grows back in 3-4 days during which time a protective contact lens is applied. The visual rehabilatation is not as fast as LASIK but the results are the same. The difference in LASEK is that the removed epithelium is replaced immediately following laser but this dies and is replenished by new epithelium in 3-4 days.

What lasers are used?

Our practice uses the Wavelight Allegretto Excimer Laser, one of the most technologically advanced lasers on the market. It offers customised treatment where necessary and through its tissue saving properties can treat many refractive errors that other lasers cannot.
The Allegretto Wave 400Q Excimer Laser
This is combined with the Ziemer Femtosecond laser for flap creation.

What are the risks? 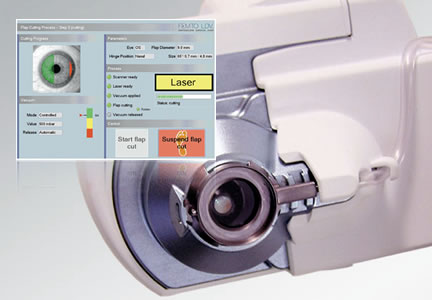 Although the majority of laser eye surgery is carried out without complications, no operation is risk free.
Fortunately, the risks are small and many problems that arise can be managed if they are recognised and treated appropriately.
Here the importance of surgeon experience and training in a dedicated refractive fellowship becomes underlined.